Pros and Cons of the Plastic Bag Ban Debate

The Facts on Plastic Bag Bans

In 2020, statewide plastic bag laws will become active in Maine, New York, Oregon and Vermont, with Connecticut and Delaware joining in 2021. This comes in response to California passing legislation to ban plastic bags in November of 2016. With Hawaii — which has a de facto ban due to all of the state’s counties imposing restrictions — added, that brings the total number of states with plastic bag banning laws to eight.

Across 23 states, over 200 counties and municipalities have their own bans in place. Additionally, the U.S. territories of American Samoa, Puerto Rico, the Northern Mariana Islands and the U.S. Virgin Islands, with Guam set to join in 2021, have enacted plastic bag bans.

If over 22% of the country’s population will adopt a bag-free lifestyle by 2021, should other states follow suit? To answer that question, we’ll examine the arguments on both sides of the debate.

What Are the Cons of Plastic Bags?

Those in favor of banning plastic bags argue that it would be one of the most effective ways to reduce the volume of plastic waste in the ocean. This would have major health benefits for both sea life and humans.

Sea life consumes up to 24,000 tons of microscopic plastic per year.

According to EcoWatch, 10 metric tons of plastic fragments, including grocery bags, wash out to sea in the Los Angeles area every day. Once in the ocean, those fragments break down into smaller, nearly microscopic pieces that are consumed by sea life — an estimated 12,000-24,000 tons per year — contaminating the food chain from the bottom up.

“I think it goes without saying that plastics (bags included) are an enormous problem in terms of litter, mostly because plastic trash is ubiquitous, and plastic does not decay in a lifetime,” said Elizabeth Mullen Matteson, founder of The Litter Project. “The amount of plastic litter just grows and grows, especially in our oceans. This is terribly dangerous to the eco systems that provide food to billions of people.”

A study conducted in 2015 by researchers at UC Davis found that one quarter of fish sold at California markets contained whole or fibrous plastic in their stomachs. Further research is needed to confirm whether the chemicals found in plastic can transfer to the parts of fish most frequently eaten by people.

Unlike reusable fabric bags, plastic bags can take many lifetimes to biodegrade. Over that time, their light weight allows them to be carried long distances, causing environmental havoc along the way.

“Exactly what happens to a plastic bag when it is littered depends very much on where it enters the environment and the mechanisms that cause it to travel,” said Patrick Chandler, Education Consultant for The Washed Ashore Project. “On a rainy day in Portland, the bag could be washed into a drainage pipe that would lead it to the Columbia River and into the ocean. On a windy day in Arizona, the bag might get stuck on a cactus where it is held until it photodegrades.”

But no matter where a bag ends up, Chandler explains that it can cause long-term harm to the surrounding ecosystem. “The bag will exist in the environment for years because plastic doesn’t biodegrade. Exactly how many years and how that plays out again depends on where it starts and where it ends up.”

3. Plastic Bags Are Hard to Recycle

“One reason why plastic bags have become such an ecological burden is our way of dealing with them at the end of their lifetime,” said Sara Slavikova, co-founder of Greentumble. “We keep producing more and more, but did not implement efficient recycling programs — particularly because their recycling is difficult.”

Nearly 93 billion plastic bags are not recycled each year.

Plastic bags can’t be sorted from other materials by the machinery at recycling facilities. They often get stuck in conveyor belts, jam equipment and delay the entire sorting system, making it impractical for plastic bags to be collected with curbside recycling.

As a result, some grocery stores provide collection bins to properly recycle plastic bags, but it’s easy for shoppers to forget to bring them back.

What Are the Pros of Plastic Bags?

Reusable alternatives are a major focus of the plastic ban debate. But how eco-friendly are fabric shopping bags in comparison to plastic bags?

A fabric bag must be used 40+ times to match a plastic bag’s environmental footprint.

A 2018 study by the Ministry of Environment and Food of Denmark showed that the manufacturing and disposal of plastic bags had a lower environmental impact than six alternate bags offered as replacement at most supermarkets. It stated that each alternate material would have to be reused a certain number of times to negate the pollution of its production and to equal that of a plastic bag that has only been used one time.

A related argument for keeping plastic bags in checkout lanes involves their convenience. For retailers, they are cheap, easy to store, and simple to open and fill. Many consumers reuse plastic bags in various ways, from lining their bathroom garbage pails to packing belongings when moving to a new home.

Convenience, however, is not the only argument against banning plastic bags. As it turns out, the companies that manufacture the bags themselves, such as Formosa Plastics and Novolex, employ thousands of people in plants and factories across the U.S. Every new plastic bag ban, critics argue, raises the risk of widespread layoffs.

In 2017, the plastic products industry employed 989,000 nationwide, making it the eighth largest industry in the United States. Of those employees, 30,900 are directly involved in the making of plastic bags.

On top of that, some stores in areas with anti-plastic bag ordinances have noticed a decrease in sales — shoppers are limited to purchasing only what will fit inside their reusable bags or simply choose to shop at a neighboring town that still uses plastic bags. As a result, some stores are unable to hire more people.

While fabric bags are great for transporting dry foods, they can be quick to absorb messes, leading to undesirable odors and potential for bacteria growth. In fact, a joint study at the University of Arizona and Loma Linda University in California discovered the presence of coliform bacteria in 51% of the 84 reusable grocery bags tested, with E. coli present in 8%.

To avoid these inconveniences and reduce the risk of contamination, many shoppers request separate plastic bags for certain items at the checkout.

Sara Slavikova from Greentumble explains that “plastic bags and wrapping overall have become widely accepted. It is approved as a standard (hygienic) packaging material.”

With eight states approving plastic bag laws — six of which have come since 2017 — the movement against plastic bags continues to gain support. However, with each ban approved comes opposition as other states have taken measures to keep plastic bags in stores.

Fifteen states — Arizona, Colorado, Florida, Idaho, Indiana, Iowa, Michigan, Minnesota, Mississippi, Missouri, North Dakota, Oklahoma, Tennessee, Texas and Wisconsin — have laws that ban cities and counties from enacting their own plastic bag bans that are being enforced to varying degrees of success. The topic is also being discussed in Alabama and South Carolina. 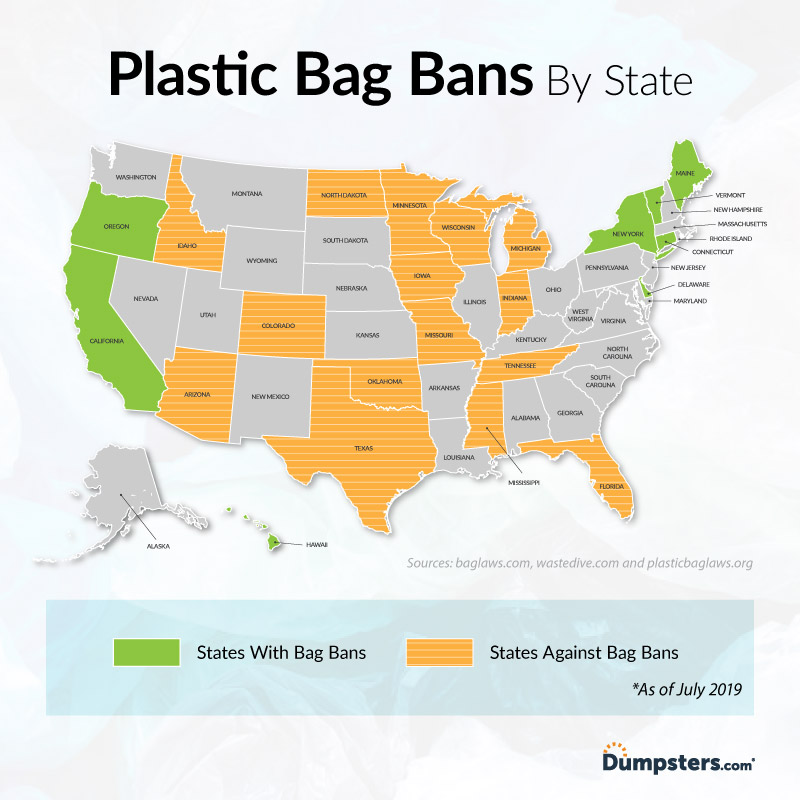 Despite opposition, the movement to ban the bag is gaining momentum in legislatures across the country, with advocates citing the success of California’s plastic bag law as a sign that other states can get rid of plastic bags without harming local economies or businesses. In fact, some of the states that have prohibited bag bans are considering repealing the laws.

But for now, most of us still have to answer that age-old question: “Will that be paper or plastic?”

Editor’s Note: This post was originally published May 5, 2017 and was updated July 25, 2019 for accuracy and comprehensiveness. Powering Toward the Future With Landfill Energy Systems

Converting landfill gas to energy has numerous benefits. From limiting methane emissions to reducing operational costs at the landfill, here’s what you should know about landfill energy systems.